Available for capacitive and inductive loads

If a load containing a capacitor or coil is driven with alternating current, the current generally flows back from the load. In this case, an ordinary power supply or amplifier may not be able to drive the load. BA series amplifier also operates (i.e., outputs the current) with a capacitive or inductive load such as a piezoelectric element or solenoid. This is because it operates also with a sink, where the voltage and current directions are reverse.

BA4850 faithfully reproduces pulse signals with quick rise and complex waveform signals as well, because the frequency band is DC to 50 MHz and the slew rate is 6,000 V/µ s.

BA4825 drives current from a large piezoelectric element or display device, because the band is DC to 2 MHz and the maximum high-voltage output is 300 Vp-p.

Because both can amplify DC, they can be input waveforms containing an offset or those that are asymmetric in the positive area and negative area.

BA series keep a low output impedance throughout the overall range (0.5Ω + 1.5 MHz or less typ. for BA4825). With the voltage drop (raised due to load connection) suppressed to the minimum, the power of the equipment is maximized. 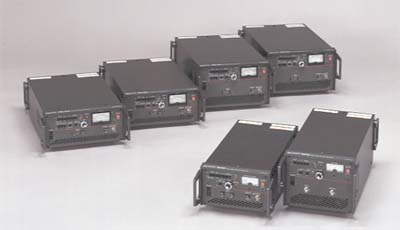